IT'S A BIG WORLD OUT THERE, SON!

Growing up, I was a small kid. Well, I still am short and petite, but what I meant was that I was always the smallest kid in my entire batch. I had my own fair share of teasing and name calling by some of my bigger and taller classmates, but honestly, they didn't really bother me at all. I knew that I had every right to be smaller than the rest of them mainly for the fact that I was two years younger than them. I had the impression that I shouldn't let people from my school know about my age fearing that I'd get demoted, or worse, kicked out, if the school find out that my parents forged a copy of my birth certificate and altered my year of birth just so I'd be accepted in grade school. Truth was that I was initially declined admission for the same reason that I was too young to be in grade school and they wanted me to attend preschool instead. My mother thought otherwise having known that I was reading and writing very good at age 4; hence, we came back the second time with a vengeance, or I should say, misrepresentation with a forged public document. Anyway, if there's anything I picked up from the taunting I received back then, it was the realization that the world is a big place. It dawned on me at such a young age that, yep, I was a small, small girl in a big, big world. Literally and figuratively.

Fast forward to puberty and all the awkward teenage years in between early adulthood to where I am at my life right now, I came to a point where I was pretty much at par with my peers and colleagues, and that age (and height) gap did not factor anymore. I have conquered insecurities, developed self-esteem, gained confidence, acquired skills, collected accomplishments, made new acquaintances, known true friends, broadened my horizon, and kept on growing into maturity that I thought, "Wow, it is a small world after all!" Literally and figuratively.

More recently, my husband and I have been taking our 18-month-old son to outings, and getting him more exposed to other children. His Filipino stature obviously does not meet the American average, so whenever he is in a common play area, it's not a surprise to see him getting bulldozed by other kids his age or even younger ones who are way heavier and taller than him. While there are admirable well-mannered kids who are aware of other children's personal spaces and are cautious and mindful when at play with smaller and younger ones, there are also those who obviously hurt or at least badger other kids on purpose. All parental bias and subjective opinion aside, how hard is it to tell a kid who is just playful, naughty, active and rough housing, apart from one who is outright misbehaving and bullying others particularly smaller kids like my son? It doesn't take a genius nor a psychological degree to figure that out, right?

Having said that, I have seen my son, in all his effort, climb up to go down a slide, only for a bigger kid to cut him in line and go ahead of his turn. I have seen him gets tossed on a bounce house when bigger kids get on. I have seen him fall on the floor when innocently pushed by a younger but bigger child. I have heard him cry when an older toddler snatched a toy away from him and purposely hit him on the head with the toy. In all those experiences, I couldn't help but feel how suddenly the world has once again become a huge place for me. It even felt like it doubled its size, now that I am a parent. Literally and figuratively.

It's a big world out there, son. I trust it won't take you long to scale it, seize it, make it your oyster, and even hold it in a paper cup like I do, and until such that time when you could do it on your own, your father and I promise to be always here for you. We'll face and conquer this giant together. We love you very much, Vonn Kaleb. 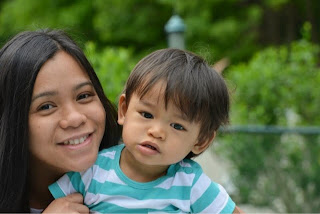 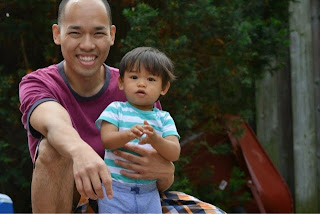 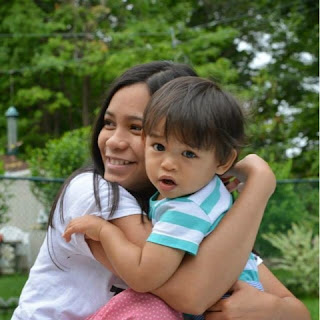 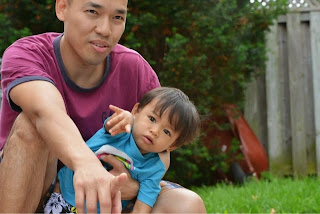