I wish I could say that our journey to sleeping through the night was a walk in the park, but it definitely wasn't. Vince and I had more than our fair share of first-time parents sleepless nights. Vonn Kaleb was a very fussy baby and a light sleeper like his father. For the longest time, we went nights after nights of waking up just a couple of hours into sleep with Vonn Kaleb crying and fussing, wanting to be comforted, and taking forever to go back to sleep, only to wake up again after a short while, and the viscious cycle repeats again. Vince and I were like zombies walking dead during the day. We were the epitome of sleep-deprived parents. Vonn Kaleb was the poster child for colic babies.

Vonn Kaleb was around 9 months old when we moved to our current house. That was when I told Vince that I'm putting Vonn Kaleb in his own room. He slept in his crib in the same room with us up until that time. Since then, he has been sleeping in his own room. It helped us to finally get more sleep at night but it wasn't an easy transition either. He really didn't sleep through the night until probably around 14 months but even still there are times when he still cries and calls for attention in unholy hours of the night. After we came back from our recent Caribbean vacation, we noticed a big improvement in his bedtime routine, in that it's now a lot easier to put him to bed. Less resistance, less rocking, less "sleep fighting." And yes, less waking up too = more sleep for all of us! Hoorah!

Since he's turning 2 soon, we decided to transition him to a big boy bed. I was thinking of getting him a regular-and-nothing-fancy toddler bed but his dad got all excited and went all out and bought him a pirate ship bed. Ahoy, matey! 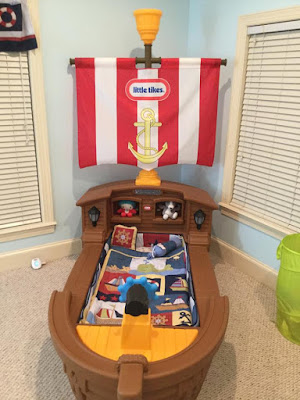 Vonn Kaleb had fun while we were assembling the pirate ship bed ;) He probably thought it was a big toy we were putting together. Hehe! Most importantly, I really wasn't expecting the transition from crib to bed to be easy, but surprisingly, it was. He has been doing so well sleeping in his big boy bed, which means Vince and me have been getting more than 40 winks in the comfort of our king bed :)

There's really no stopping Vonn Kaleb from growing. He graduated from the crib and has now moved up to a toddler bed. I understand that not all kids mature at the same phase, with some advancing faster and others who take their time to eventually catch up #latebloomers. For us who came far to achieving a sleep-through-the-night status, this is an accomplishment we are happy and proud of. Each step towards independence albeit how little they may appear to others, like weaning off the bottle and transitioning to sippy cup or learning to use the fork to feed himself, these are triumphs that we celebrate in our family. In the short time that I've been a parent, I have learned that parenthood is anything but easy and those benchmarks and milestones make it more rewarding and worth it :) Having said that, I'll sign off using a very appropriate parenting remark from my husband, "Sulit na. Hindi ka naman lugi." ☺☻
Posted by KM No comments:

Vonn Kaleb is turning 2 in a few months. Already?! It seems like it was only last week when I gave birth, three days ago when I had a newborn, the other day when I had an infant, and yesterday when I baked his 1st birthday cake... and now a toddler onto his terrible 2s?! Gosh, where did the time go?

Anyway, I thought I'd check which milestones my precious son has reached so far, and according to Centers for Disease Control and Prevention, here is what most babies do at 2 years of age (please bear in mind that Vonn Kaleb is only 21 months at the time of writing):

✔ Gets excited when with other children - *Not so much, but his social skills have improved a lot since we came back from our recent vacation in October.

✔ Points to things or pictures when they are named - *He's been very good at this, and he just keeps on getting better and better, and his vocabulary is growing each day.

✔ Knows names of familiar people and body parts - *He can now say "mommy." Finally! The way he says it is kinda funny and cute at the same time because his pronunciation of 'M' is 'B' (and this is for most of the M words he could say.) So "moo" is "boo", "me" is "be", and "mommy" sounds like "bombby" - yeah, there's a hint of M somewhere in there but the more prominent letter you'll hear is B. Interestingly though, he can say "ma" but for actual words beginning with the letter M, he pronounces B instead. Hmmm...*

Says sentences with 2 to 4 words - *Although his comprehension is very good and bilingual I should say, his speech is somewhat behind. That kinda' get me concerned, so I spoke to a pediatrician I know and she advised me to wait and see until Vonn Kaleb is 2 years and 2 months. She told me that some boys just take their time and most of them they catch up - and this is also what my husband has been telling me. She told us that what she tells her patients is that if by 2 years and 2 months, if the child was still not talking as he was supposed to, then that's the time to consider evaluation and speech therapy. Since I was being antsy and anxiously worried by the delay in Vonn Kaleb's speech, Vince and I agreed to give him until 21 months, and seek help if he's still not talking at that time. Guess what, he started saying "daddy" and "baby" very clearly at 21 months! Well now he's still "bulol" (sorry can't find the exact translation of this Filipino word in English) and does not pronounce all the sounds/letters of words - like "moon" is "boo", "car" is "ca", "chips" is "chi", "chocolates" is "cho", "spoon" is "poo", "sky" is "ky", and so on, but what he used to say as "baba" for "bye bye" is now really "bye bye" and same goes for "hi." There are words which he enunciate very well like "go", "daddy", "baby", "puppy", "key," etc.

✔ Follows simple instructions - *He has been very good at this... and in two languages - Filipino and English.

✔ Points to things in a book

✔ Finds things even when hidden under two or three covers

✔ Begins to sort shapes and colors - *Shapes, yes. Colors, hmmm... I haven't really paid attention if Vonn Kaleb has started sorting them - this is a homework for me.

✔ Completes sentences and rhymes in familiar books - *This is our new hobby and source of entertainment. Hehe! He's very, very good at this, and Vince and I are so proud of our son. Like I said, Vonn Kaleb is still "bulol," but regardless, oh boy, he does know how to complete sentences, rhymes and songs. He can even recite the alphabet on his own with some cues and help from us, despite his delayed language skill. We're impressed with how awesome he is at this. ☻

✔ Builds towers of 4 or more blocks - *There are blocks everywhere in our house now.

??? Might use one hand more than the other - *He hasn't shown particular hand dominance yet, although when he was younger, he used his left hand more than the right. There's a lot of lefties in my side of the family (my father and two aunts are, and a number of our cousins, too), and my mom-in-law is ambidextrous, so we'll see ;) Me and Vince are both righties by the way.

✔ Follows two-step instructions such as “Pick up your shoes and put them in the closet.” - *Like I noted above, Vonn Kaleb has been very good at this - and in two languages.

✔ Names items in a picture book such as a cat, bird, or dog - *He can recognize and identify all the letters of the alphabet as well as numbers 1 to 5.

✔ Stands on tiptoe - *We really never encountered a problem with his motor skills. In fact, his motor skills develop quite advance for his age. He took his first baby steps at 11 months, and the funny thing with the way he walks is that he walks on tiptoes. Hehe! He was a "bear crawler" - he used his hands and feet (instead of knees) to crawl - so we called it the "Spiderman crawl." He runs more than he walks - and he is always running fast... like 60 mph or something like that. LOL.

✔ Kicks a ball - *He started doing this shortly after he turned 1. He has very good visual motor skills and coordination.

✔ Climbs onto and down from furniture without help - *He has transitioned into a toddler bed now. Yay! Mind you, not just an ordinary toddler bed, but a pirate ship bed complete with mast and canon and lights and secret treasure compartment and all that. Hehe!

✔ Walks up and down stairs holding on

Based on the above checklist, Vonn Kaleb seems to be on track with his developmental milestones. Other than his delayed speech, overall, it appears he is developing age appropriately. As I said, he is only 21 months at the time. Hopefully, by 24 months, he'd be talking two-word sentences, and at 3, he'd be fully caught up with his speech and social skills ☻ Regardless, I'm always so proud of my boy, and he makes me one very blessed momma! I love you, Vonn Kaleb ♥

Vince is now a TV star. Or so we joke. Hehe! He very recently was interviewed by our local Fox News regarding one of the most talked about topics during cold season, that is the flu vaccine. He didn't say yes right away when they asked him if he's okay to do the interview. He said that he'd talk to me about it first. When I asked him why the hesitation, he told me "he's shy".  *Totosh!  Well, he has done a couple of interviews for our local radio station, and every now and then, he does lectures for a good number of people, so there was no doubt in my mind that he'd do just great on TV.

Anyway, Vince did the interview, and it was aired on TV the day after. When I saw it, I thought, hmmm... he sounded legit, LOL!  Kidding aside, I'm one very proud wifey here. Why wouldn't I be? He looked really handsome on screen -- uyyyy, telegenic ☻ His suit and tie complemented his looks -- ♥kilig! He was very articulate (as always) and spoke with authority and credibility regarding the topic at hand. I have to mention here that he wasn't given the questions pre-interview, so he was basically answering them on the spot (*lunok*). When they were done, the interviewer commended him for being a "natural." Apparently, some of the doctors they have interviewed needed cue cards, whereas Vince breezed through it like a pro ;) Yap, that's my husband right there ☺

Okay, enough talk now. I'm starting to steal my husband's thunder. Hehe! This is his moment, and so allow me to share to you a clip of his interview:

*PS: Totosh is our family's very own signature one-word expression and often used when we tease each other or when Vonn Kaleb is being adorably and irresistibly cute! ☺ I wish you could hear how we say it. Totosh!
Posted by KM No comments: