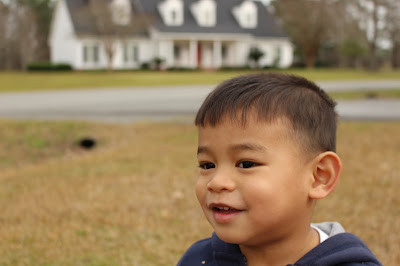 It's crazy how super fast time flies when you're a parent, and whenever I realize that my pint-sized boy is no longer the tiny, fragile, fussy, unable-to-talk baby I used to cradle and carry like Roo-in-Kanga's-pouch, I get sentimental. *sniff sniff*

Sigh. The cycle of life. So surreal at times... (and another sigh!)

Anyway, emotional dramatic mother feelings aside, I am joyful and thankful beyond words to see how my precious child grow each day. I am in awe of his growth, and his development have truly been leaps and bounds. It's simply amazing how a child can transform over a short period of time, and to be there to witness it happen right before your eyes every passing day is truly a blessing.

According to Centers for Disease Control and Prevention, most children at age 3 do the following:

My son does everything in the above checklist except "dresses and undresses self" which he can do but still with assistance from adults.

The most challenging milestone we have met in this aspect was "separates easily from mom and dad." He has always been the clingy (untouchable by others) baby. Recently, he has been attending Sunday School and Nursery on his own without resistance. We also has had success leaving him with his grandparents a few times for date nights. He understands now that "grown-ups come back (thanks to Daniel Tiger!)"  when he is separated from us, his mom and dad. Honestly, knowing how clingy my boy is, I didn't really expect we'd get to this point this soon, where we can actually leave him in a Sunday School class without him bawling his eyes out. I'm the proudest momma in the whole wide universe every time I bring him to Sunday School and he willingly joins the class and not run after me when I leave.

It overwhelms me how my son's language/communication skills has been evolving. I was so concerned about his speech being delayed. He didn't say a word (Daddy) until he was 21 months old. I prayed and prayed to God to help us in this regard because the thought of my child being unable to utter not even a single word when most kids his age were already engaging in conversation with their parents was getting too concerning for me. So, you know, now that he's turned into a very cheeky, chatterbox, who talks and sings nonstop all throughout his awake time, my husband and I would just shake our heads and tell each other, "We asked God for it." His language and communication skill for his age is pretty impressive and amusing at the same time. He never fails to entertain us and his grandparents with his witty remarks. Actually, he is a little bit advanced in terms of his language/communication skills, and I'll get to that in detail later at the end of this entry.

Examples: This morning I asked him to put on his sandals and his reply to me was, "Maybe later." The other day he told his friend, "Miss Isla, you have to use the potty before we take a nap." His most used expression? "I don't want to!"

Also, he loves playing with his words. He conjures and twists words to make new words. He intentionally changes word pronunciation. He talks nasally in purpose. He is so silly!

BUT, my favorite is when he randomly sings and hums tunes. To say that he loves to sing is an understatement. Really. AND I'm not saying this because I'm his mom, but our friends in church have already noticed his singing too. Sooooo sooooo precious! He reminds me of a quote I read before, "A bird in the house is like sauce to meat." With all the talking and singing he does all day, there's just no dull moment with him. 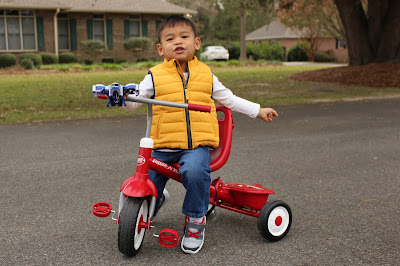 My boy's pretend games are so creative. His make-believe games are so "vivid" that an adult could easily jump into the story. The other day, he was playing with his friend, Isla, here at home. He was riding his tricycle, when he said, "There's a train! We have to stop." Isla didn't budge. She looked around, stretched her neck, wondering. After a few seconds, she asked, "Where's the train?," and you could see in her face that she thought Vonn Kaleb meant an actual train. Vonn Kaleb replied to her pointing to a direction, "Right there, over ahead of us!" These toddlers are so precious.

Puzzles - he has been doing 12-piece jigsaw puzzles for quite a while now. I've been wanting to get him 24-piece ones but I just hadn't gotten to buying them yet.

He does know what "two" means, so as three, four, five and even up to 20. He can "subitize" up to 6. I used dice to introduce him that technique when he turned 2, and I really wasn't expecting him to get it right away. The dice were much more enticing to him as a toy than a mathematics learning tool, so I didn't really pursue, but I guess, the concept did click on him, because now he can easily count objects up to 6 with one glance.

His building skills have gotten more creative too. This morning, he made an elaborate ship out of his Lego Duplo blocks. I thought it was just me who noticed that but his grandmother did too.

MOVEMENT/PHYSICAL DEVELOPMENT
He loves riding his tricycle! I didn't think he'd learn to pedal before he turns 3, but lo and behold, he did! I'm soooo proud of my boy :) 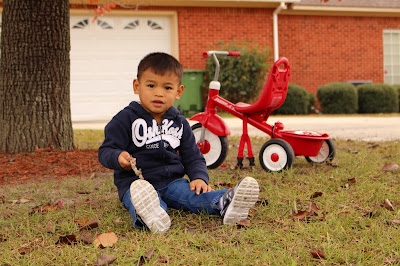 In conclusion, my son's developmental milestones are on track, and as I mentioned above, in some aspects, he is actually ahead. Just out of curiosity, I checked what 4-year-olds usually can do, and out of the checklist, here are things that my son (shy of 3) can do now:


Again, as I have observed (all bias aside) he is very creative in terms of pretend play.

His grammar is impressive, considering his parents, whom he learns majority of his communication and interaction skills from, are ESLs. He uses past tense and plural forms. He knows basic pronouns.

He sings songs, and I'm not talking about nursery rhymes or children songs - songs with different verses, choruses, refrains, bridges, etc. He sings Kids Praise songs, Sandi Patti songs, church hymnal songs, good ole' nursery rhymes, TV show songs, Christmas songs, etc. Sometimes, he knows the words to a song more than I do. He would even correct me when I sing the lyrics wrong or got them mixed up or even with just a word that I didn't get right. This boy loves to sing, he picks up songs so quickly.

He knows his full name.

He knows his colors and numbers and letters, too! Uppercase and lowercase both. I haven't taught him how to actually read yet. I'm taking it slowly as I don't want him to get burnt out, so right now, whenever we read books, I throw a word here and there, for him to "read" and spell, and he has been doing very good so far. He actually can spell and "sight" read a bunch of words now. I keep a list of those words and I add whenever he learns to spell or "sight" read a new word.

He knows how to count. This afternoon while I was so busy cooking, I heard him count 1 to 20. When I turned to look, he was counting block "pegs," and to my surprise, he was right! I had to do a double take to make sure there were really 20 "pegs."

He sort of has a concept of time now. The way we do it at the moment is we tell time by saying where the hands of the clock point to and what does it mean. For example, we say, "It's pointing to 8 and 6. That's 8:30. That means, it's time for bath." He follows that pattern whenever he talks about time. This morning, I told him that we need to get up from bed already as I have to cook for lunch, and he said to me, "I want to cuddle for 5 minutes." So I said okay to him but I told him that when the clock points to this and that, we have to stand up then because that means 5 minutes is up.

His memory is very sharp. He is keen and very observant. He is particular to details. He has no trouble remembering parts of stories.

He knows what same and different are.

So yeah, there you go! I know this post is way too long and self-serving, and I meant it that way. If only we could install a camera that will capture ALL of his moments a la THE TRUMAN SHOW, we would definitely do it, just so we could document everything. With him growing so fast and changing each day, I want to keep a record of his milestones even if only thru this blog.
Posted by KM 1 comment: