After searching high and low, Vince and I finally have our own living room set.  We had been wanting to get one since I moved to Lebanon, but we were on a budget and wanted our purchase to be affordable and reasonable without sacrificing the quality and aesthetic factor of the furniture.  We had looked around different stores online and on-site but we decided to hold off on buying until we find a really good deal.
Last month while out on a regular weekend, we happened to stumble upon Ashley Furniture Store.  The place is definitely a furniture haven.   Most of the styles that we initially saw were too regal and royal for our humble abode, but as we walked further around the store, we saw several styles which suited our liking and pockets!  We both agreed on getting a leathery material as opposed to cloth/fabric mainly for upkeeping purposes.  Two days ago, our living room set finally was delivered, and yesterday, we spent time rearranging our apartment to accommodate our brand new furniture.

Without further ado, allow me to share photos of our newest fruits of labours, and latest addition to monuments of God's blessings in our lives!
PS: I hope you won't mind that I threw in some other pictures ;)

♪♫ We've only just begun to live, white lace and promises, a kiss for luck and we're on our way ... ♪♫

FOR HEADACHES OR WORSE

Last Sunday, a day after our exhausting day-trip to Washington, DC for the National Cherry Blossoms Festival, I woke up with a terrible headache. I then felt like the room was moving sideways similar to an earthquake - only it was not really moving. Following shortly, I felt queasy. My head felt like it was going to explode. I was sick - very sick - then.
The moment Vince realized how bad I felt, he got up to his feet and quickly attended to my pain - Extra Strength Tylenol, a glass of water, basin and napkins. He carried me to the washroom when I needed to go. He wanted to stay with me inside there to make sure I don't fall. He asked if I wanted to be brought to the emergency room, which I declined. The Tylenol subsequently kicked in, and somehow I managed to throw up (from both ends) whatever toxins inhabited my body, and I felt a bit of relief. Not too long, I again fell asleep in the arms of the man I love.
When I woke up that night, I was still feeling a bit wobbly and queasy, but a whole lot better than earlier. I asked Vince what would have happened if we went to the emergency room. He said that they would have considered pregnancy, subarachnoid hemorrhage, or meningitis, and would have sent me to CAT scans and other diagnostic tests. My gut feeling tells me it was just a bad case of exhaustion/fatigue. I have not been getting good sleep prior to that, not to mention that I was out the whole day walking all my might around Washington.
To cap the night off, Vince prepared dinner. Afterwards, he let me relaxed (which means going online facebooking, etc.), while he did his usual OC-OC household chores (which mean vacuuming, laundry, folding, etc.) Since we slept off most of the day, I was up until about 4:00 a.m. that night, although Vince said he really was not able to get a wink at all.
I am really thankful that Vince was beside me during that difficult time. His presence soothed my pain. It was comforting enough to know that I was not alone during that ordeal, and that someone was lovingly taking very good care of me.
*****************************************************************
*****************************************************************
In sickness or in health,
For headaches or worse,
Till death do us part :)
Posted by KM No comments:

LAUGH FOR THE DAY

One day while Vince was at work, he emailed me asking my help to review a letter of recommendation he wrote for their program coordinator, Marsha, whom much to his dismay, is being transferred to a new post at the Hershey Medical Centre. Not that I am a better writer than him (in fact, it is the opposite), it is just that, you know, it is always better to have another set of eyes to proof.  He said in his email, "Patulong po ako mag-edit ha? Parang kulang kasi eh. Thanks sa suggestion and help love!"  So, I read it in passing; and I thought it looked perfectly fine until I got to a line that had me snickering. When we eventually had the chance to talk on the phone, I told him that the letter is good except for one which I felt needed rephrasing if possible. I prompted him to read some parts of the letter aloud to me:
"Marsha has been a great resource person during my residency... She answers my questions and queries in a timely manner and she is always ready to help me in whatever way she can. I am saddened to see Marsha depart..."
I had to stop him right there, "That's it, mahal. Can we rephrase that last part? Para naman kasing namatay na si Marsha nyan eh. 'Kinalulungkot ko ang kanyang pagpanaw.'" After pointing that out, I let go of a laugh I had been suppressing all that time. Hahahaha ! As if not convinced myself, I asked Vince, "Is it just me? Or that's how it really sounded? Mahal, you are supposed to write a letter of recommendation not a eulogy." LOL.
I was relieved to hear Vince agree and laugh over it, too. So, I left it up to him to rephrase it ;)

OF BABY BUMPS AND MUFFIN TOPS

KAREN: *toinks*
~ end of conservation ~
Well, if I may, allow me to explain why I got dumbstruck.
I actually had the instinctive urge to blurt out, "Wait, that's not what I was expecting to hear." I was hoping Vince would comfort and assure me by saying something like, "Don't worry, love, your tummy will be as flat as crepe as soon as you deliver the baby."  By offering to buy me new (which by the way translates to upsized) clothes, it was pretty obvious he was clueless to where I was coming from or heading to. On the other hand, the idea of SHOPPING (which you probably have already figured by now) got me all excited and thrilled, so in the nick of time, I decided to just shut up and mum to myself, "Oo nga naman, may point nga naman sya.  Syempre pag nabuntis, pwede ba namang hindi lumaki ang tiyan ? Duh." LOL.

FROM SINGLENESS TO DOUBLE HAPPINESS 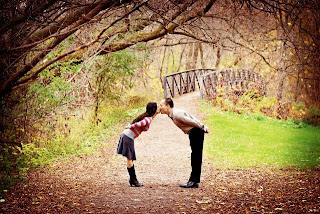 It has been a little over five months now since I got married. The adjustment from living alone to having to share almost everything with my better half has been going really well. Smooth as it can be, still we have trivial misunderstandings every once in a while, especially during the early transition phase, but thank God, we have been doing a great job of agreeing to almost everything. A little spat here and there but all gladly ends well. Though we have not encountered enormous forks in our marriage yet, I believe that with God's help, if we would be faced with one, no rocky road uphill is insurmountable.
Anyway, having said that, I am happy to announce that this blog has now matured from being the emotera de soltera you have always known in the past to a happily married sexy emotera. Haha ! If you thought for a while there that you would be able to escape my dramas, sorry darling, but I have to disappoint you because getting married definitely does not make one less emotional (or at least in my case). Once a drama queen always a drama queen. Only this time, life is a whole lot easier and more fun because I have a better half who is willing to split the sorrow and double the joy with ... forever and for always :)
So sit back and relax. You may grab a cup of warm chocolate or snuggle under a comfy blanket. What you are about to follow is an improved, wider-scoped, multi-perspective, MORE THAN SEXY blog chronicling me, my sanity, and all that is left of me + VINCE ♥