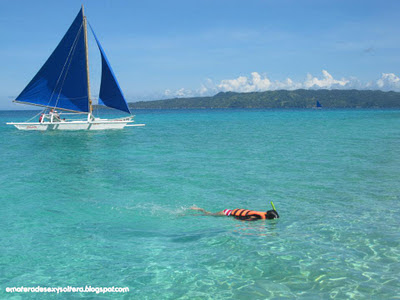 Could you blame me if almost all I've been talking about in my blog for the past days was my Boracay trip?  :)  Just look at that azure sea, white sand and clear skies wrapped up in a total package of serene ambiance.  Oooohhhhhhh...  I think I need another vacation now.  LOL.

Anyway, the story behind the pictures in this post is as follows:

My family and I did an island hopping tour in Boracay, wherein we stopped for half-an-hour or so at this haven called Puka Beach, where rare puka shells are found.  The place was truly a sight to behold.  I initially thought I would only stay in the shore and dip in the water for about 10 minutes, but once I saw how clear the water was, I just had to put on my snorkeling gear so I could go into the deep.


On the other hand, my brother and mother went ga-ga over the shells found in this beach and spent a heck of time by the shore collecting shells and haggling with locals who were selling puka shell accessories.  My father however complained that the sand was "rough" on the feet - oh well, obviously, because of the shells.   Hehe!   My sister, brother-in-law, and Pakoy had a great time themselves playing in the water.


When we were about to leave, we had to practically drag my mother away from the beach, because:

1)  She would not stop haggling with the locals.  Honestly, we all pitied the locals because they were not overpricing or anything, but that is just how my mother has always been since time immemorial. *Me rolls eyes, shakes head, grins big*

2)  She wanted to take home mounds of "shells."  Apparently, according to the locals, shells are okay to be kept as souvenirs, but corals are not.   They told us that it is illegal to remove corals from the sea, and there is a fine should you get caught.  So, she and the locals spent a good deal of time (again) sorting out which ones are shells and which ones are corals.

Guess what?  At the end of our Boracay trip on our way back to Manila, after much urging from all of us, my mother brokenheartedly decided to part ways with her collected "shells" in fear that airport authorities might catch her with a "coral" mistaken to be a "shell" and be fined for it.  If it is any consolation at all, she went home with a bunch of locally handmade oh-so-pretty-oh-so-fine puka bracelets and anklets anyway ;)