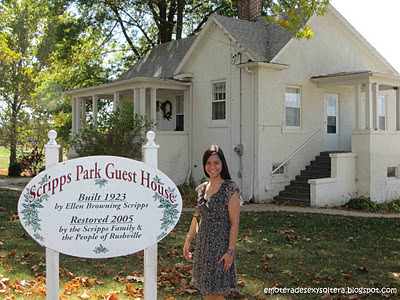 The Scripps Park Guest House was built by Ellen Browning Scripps, an American philanthropist who is known for her generous donations in South California.  Among her many philanthropy contributions were schools, medical centers, an institution of oceanography, museum, an aviary, and a recreation center.  She also helped her brother, James, found The Detroit News, a major newspaper in Michigan.  Her half-brother, Edward, founded the powerful chain of Scripps newspaper.  Ellen Scripps came to America in 1844 with her father and grew up on a farm in Rushville, Illinois.

When Vince and I went for an interview/site visit in Rushville in fall of 2011, we had the privilege to lodge in the Scripps Park Guest House.  Allow me to take you on a virtual tour inside and around the said cottage:

Vince and I were supposed to stay in the guest house for two nights but on our second day, when the interview was done and with nothing much to do in Rushville, the urban being in us got pretty bored.  We also realized that we couldn't survive another day without Internet, so we hurriedly booked a hotel in St. Louis, Missouri, packed our stuff, drove to St. Louis, and flew out the following day ☻